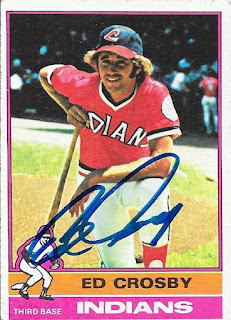 I can't tell you which era of cards I have gotten signed more, but if I had to guess, it might be the 70s.  I have a lot of bulk boxes of 70s stuff, and have been getting those cards signed since 2016.  I like seeing the retro uniforms, the cool hairstyles and the Topps designs of those years.

This TTM success from Ed Crosby dipped into those 70s cards, and the above 1976 Topps is a really nice one to get back.  1976 was a good, but simple, design, and I have enjoyed adding those to my albums. 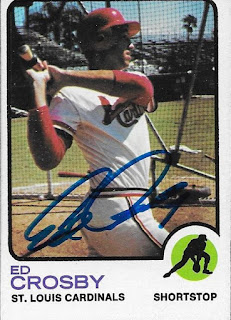 1973 Topps is also a simple design, and Topps was trying a lot harder for action shots, as opposed to portraits and staged shots.  I like the 73 set, even though the photography looks like I shot it with a basic film camera.  Hey, they have come a long way.