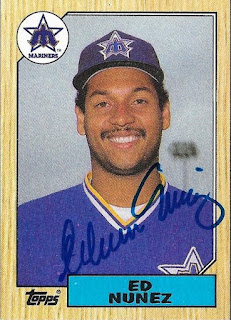 The next of the three 1987 Topps I picked up for my set was this nice Ed Nunez.  Nunez has a really awesome signature, and the auto was pretty cheap.  Nunez doesn't sign often, from what I could tell, so it was nice to cross this one off of my list.