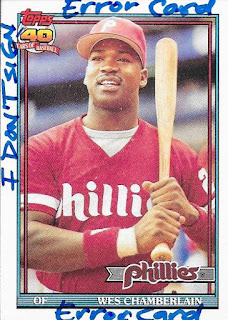 When I got my TTM success back from Wes Chamberlain, I saw this 1991 Topps  that he marked up as can be seen above.  I actually thought it was really cool, so the card will also go into my autograph album.  I was told that Louir Meadows was pictured on the card.

I also got these cards signed.  His signature is really cool, and takes up a lot of the card.

I mailed to Chamberlain on Jannuary 10, and got the cards back on January 19, for a 9-day TAT.
Posted by William Regenthal at 10:12 PM

That 1991 Topps card is cooler than the other three autographed cards combined. Very, very cool.