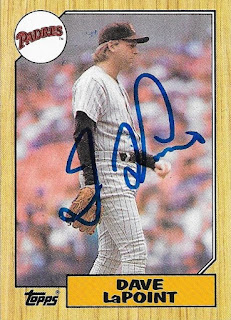 My good friend, Jacob, sent me this signed 1987 Topps Dave LaPoint in exchange (I think) for a few Expos cards that he needed.  I have been so slow to ship him stuff, but I'm waiting on the last few names for Expos Fest to be announced.  Once they are, Jacob is set to get a decent package of cards.

Thanks for the card, Jacob!
Posted by William Regenthal at 9:53 PM