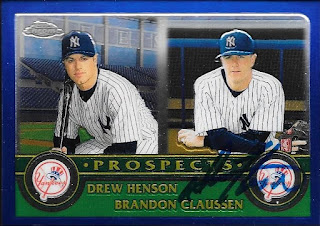 While I was at the LCS recently, I found some boxes of rookie cards from the early 2000s that I searched in order to find some guys who signed TTM.  One of those was former Yankee, Drew Henson.  I found several nice cards, and they turned out really well when I got them signed.

I liked the 2002 Bowman.  It was the thicker version, but the card was damaged when it got back to me.  Probably from when the envelope was processed at USPS.

I mailed to Henson on January 7 and got the cards back on January 19, for a 12-day TAT.
Posted by William Regenthal at 2:51 PM