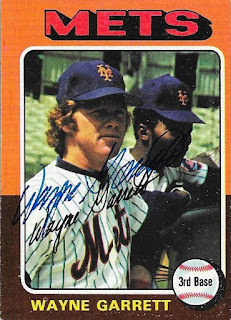 Here is a TTM success I got on some 1970s cards from Wayne Garrett.  These were all hanging around in my boxes for a while, and I finally got them sent out and returned.

I mailed to Garrett on January 14 and got the cards back on January 28, for a 14-day TAT.
Posted by William Regenthal at 6:09 PM