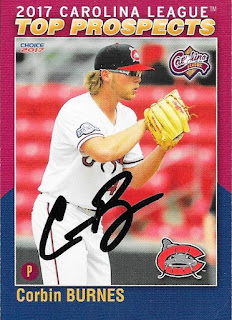 I was happy when I saw that former Mudcat, Corbin Burnes, was signing TTM, because I still had a ton of his cards here.  I was especially happy to get this 2017 Carolina League Top Prospects card signed.  I doubt I will complete the set, but it is nice to get another from it signed. 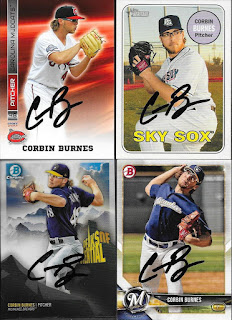 I also was able to get my 2017 Mudcats team set card signed, along with a few 2018 cards.  He has already been called up to the Brewers, so I figure it might get a little tougher to get Burnes from here on out.

I mailed to Burnes on January 5 and got the cards back on January 19, for a 14-day TAT.
Posted by William Regenthal at 4:35 PM

Love the googles. I need to find more cards of him.