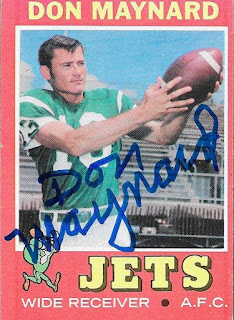 I was looking through the display cases at my LCS recently, and saw a few vintage football cards that would look cool if I were able to get them signed.  So, I checked to see if the players signed, and a few did.  I picked a few up and sent them off.  The first one to come back was this 1971 Topps Don Maynard.  The card turned out really well, and I was glad to get it into my album.