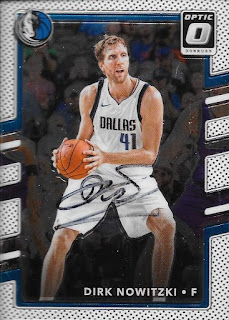 I'm not an NBA fan by any means, but a while back, I ordered something off of Ebay, and the seller added a bunch of basketball cards as filler to my package.  One of those cards was this Dirk Nowitzki, and I had seen some folks get him TTM.  So, I sent it off and waited for it to come back.  It finally did, but the signature wasn't too great.  It's there and all, but it would have been nice if it were better.  Oh well.

I mailed to Nowitzki on September 29 and got the card back signed on January 19, for an 111-day TAT.
Posted by William Regenthal at 11:49 AM