Ebay Pickup - Some Tougher Autos For The 87 Set 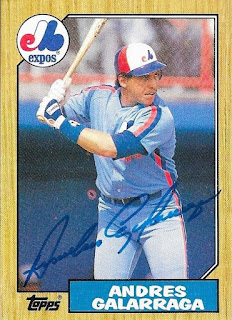 BBC Exchange had a bunch of signed 1987 Topps cards for sale in their Ebay store at great prices, so I picked a few out of the list and added them to my set.  I picked some of the seemingly tougher ones and went with those.  I started out by looking for a signed Tom Seaver, but his signed 87s have been near impossible to find.  So, I grabbed a few other guys that I hadn't seen and crossed them off of my list.

I had been holding out hope that Andres Galarraga would do a signing sometime soon, but it always seemed like I missed out.  I think he has done Expos Fest a few times, but at the price that BBC Exchange had this card at, I went ahead and got it. 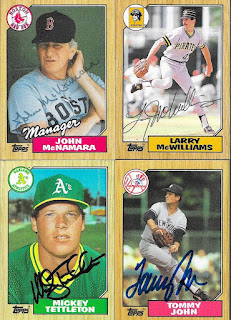 I really need John McNamara on a Red Sox Team Leaders card (and Seaver too).  I just received a signed 84 Topps from McWilliams after waiting for over 2 years, so I grabbed this one so I wuldn't have to wait again.

Tommy John had been signing, but I learned that his ex wife was taking the money sent to her address and signing his cards herself.  Mickey Tettleton seems to be a tough get, so I went ahead and bought this one.  I have something else I want to get him on anyway, so if he pops up on a private signing, I'll do that card instead and will already have the 87 out of the way.
Posted by William Regenthal at 8:39 PM

Very cool project. I love the 87T design. I just picked up a signed Barry Bonds. That's easily one of my favorite cards in the set.