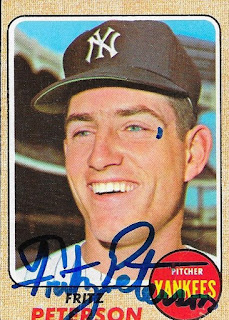 I had met him a couple years ago at the National, but I found a few more cards, so I sent TTM to Fritz Peterson a while back.  The cards turned out well, even with the stray mark on my 1968 Topps. 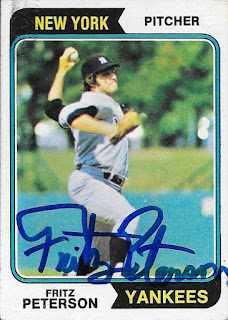 This 1974 Topps was left over from what I had at the National, so it was nice to get it signed, and into my album.  The 1968 Topps was robbed from my vintage box, but I think it is better off having been signed, instead of sitting there waiting for me to start the 68 set.

I mailed to Peterson on January 9 and got the cards back on January 28, for a 19-day TAT.
Posted by William Regenthal at 9:39 PM