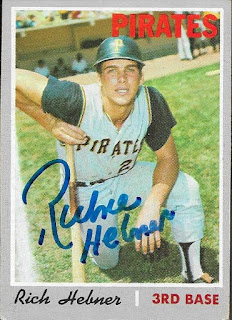 I was able to get a few cards signed by former Orioles coach, Richie Hebner with this TTM success.  I had made a Sportlots purchase recently, and to round out an order, I included this 1970 Topps.  I'm glad I did, as the card turned out really well. 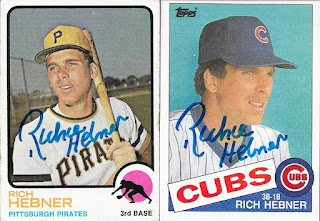 Hebner has a really nice autograph, and it looks great on the cards that I sent.

I mailed to Hebner on January 8 and got the cards back on January 25, for a 17-day TAT.
Posted by William Regenthal at 7:59 PM

Funny thing about Hebner, he is a great signer in the mail but pretty unfriendly in person. He was a coach in Double-A a few years ago and I ran across him after a game in CT. He was pretty grumpy and not happy to sign. We all just said the heck with it, next time we'll just mail him our stuff!