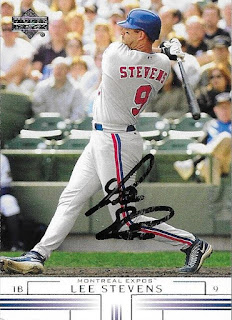 I added some late 90s/early 2000s cards to my autograph album with this success from Lee Stevens.  I had a lot of cards to choose from, so I picked one from what is probably my favorite Upper Deck set (2002), and some Topps issues.

I mailed to Stevens on January 14 and got the cards back on January 22, for an 8-day TAT.
Posted by William Regenthal at 8:00 PM