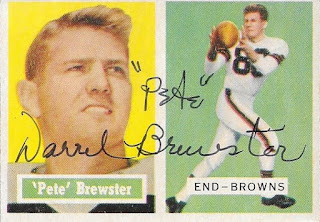 Here is another of the vintage football cards that I picked up from my LCS to send out for TTM.  This is a 1957 Topps football card, which looks really nice.  I got it fairly cheap and sent it off.

I mailed to Brewster on January 14 and got the card back on January 28, for a 14-day TAT.
Posted by William Regenthal at 6:21 PM