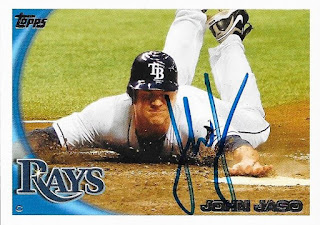 I added some pretty sweet cards to my album with this TTM success from John Jaso.  The above 2010 Topps Update is a card that I was really happy to see come back signed.  I love the horizontal shot, and the headfirst slide.  This card is really great! 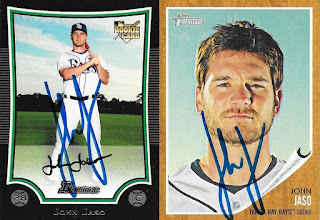 I was also able to pull a couple old cards out of my boxes, the above 2009 Bowman has been in there since 09, and I was afraid I wouldn't be able to get any more of those out of there.  The above 2011 Topps Heritage was something I threw in right as I was preparing my envelope for mailing, and it turned out really nicely as well.