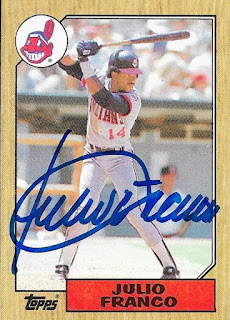 I was really excited when I saw that there was going to be a private signing with Julio Franco.  I needed him for my 1987 Topps set, so I jumped at it.  The card turned out great.

Wowza. Julio charges $29 to sign cards? i guess it makes sense. He doesn't have many certified autographs out there.