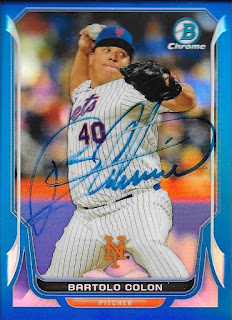 I was really excited to get this TTM back from Big Sexy, himself, Bartolo Colon.  I think is has been great for baseball to see how well Colon has done the last few seasons at his age.  He says he wants to continue pitching, and I hope someone signs him.  I believe I pulled this blue refractor out of a pack.  It's either that, or I got it out of a dine box at the National.

I mailed to Colon via the Rangers on August 20 and got the card back on September 29, for a 40-day TAT.
Posted by William Regenthal at 4:40 PM