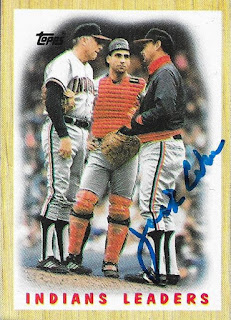 The team leaders cards in the 1987 set are pretty tough.  In years past, those cards told you on the back who was depicted on the front.  That stopped with the 1987 set, and continued for 1988 and 1989.  I've had to rely on some online checklists to figure out who was on the cards.  I got this Indians one signed by Jack Aker, so that helps. 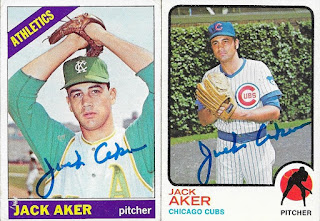 I mailed to Aker on September 6 and got the cards back on September 18, for a 12-day TAT.  I paid his fee of $5/card.  By the way, the other two people on the Indians card are Chris Bando and Phil Niekro.
Posted by William Regenthal at 7:38 PM