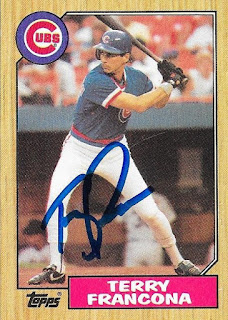 He's a tough signer, so I went through a private signing on SCN through Signatures For Soldiers and landed this signed 87 for the set.  It cost me $15.00, which I thought was well worth it.

I mailed to the signing on August 16 and got the card back on September 18, for a 33-day TAT.
Posted by William Regenthal at 7:00 AM