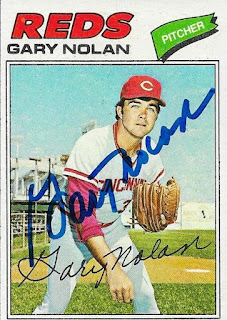 I still am way behind on posting TTM successes, so here is the next one in line.  I used some 70s cards and sent to Gary Nolan.  I got 4 cards signed with the success.

Nolan has a nice signature, and it was pretty consistent across all of the cards I sent.

I mailed to Nolan on August 30 and got the cards back on September 10, for an 11-day TAT.
Posted by William Regenthal at 6:05 PM