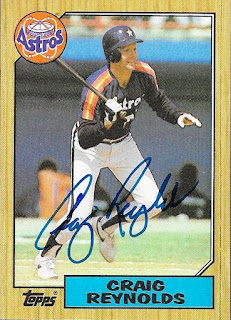 This private signing of Craig Reynolds took a while to come in due to a mistake from the organizer of the event.  He sent me a 1987 Topps Craig Reynolds back, but it was unsigned.  I messaged him, and he finally got a signed one to me when he sent with another signing I signed up for later on.  I'm glad it finally came in, so I could cross it off of my list.