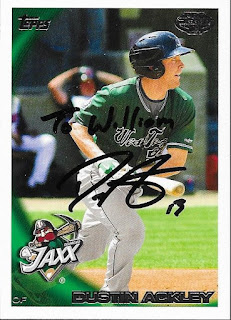 Winston-Salem's own Dustin Ackley signed a TTM request for me.  He signed and personalized 4 cards for me, including the above 2010 Topps Pro Debut that I have been sitting on, well, since 2010.

I always try to keep an eye on fellow North Carolinians in the majors, and especially Ackley, since he is from Winston.  He went to North Forsyth High School.  I'd say they were our rivals, but they really weren't.  At least not serious ones.  Still, it is pretty cool to see that he made the majors.