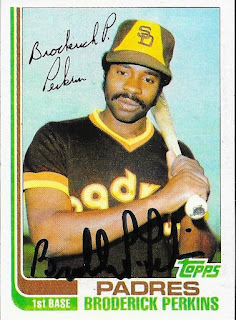 Here are some cards I got signed TTM by Broderick Perkins.  Perkins is rocking the very retro Padres uniform in this 1982 Topps.  Those old brown and yellow hats were pretty bad, but I suppose you could call the design a classic now. 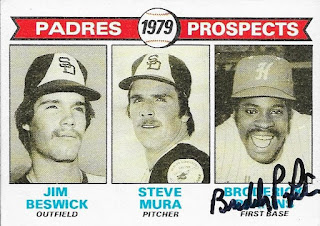 It looks like Perkins was pretty excited to have his own baseball card, judging by the photo on this 1979 Topps Padres Prospects card.

I mailed to Perkins on January 22 and got the cards back on September 23, for a 244-day TAT.
Posted by William Regenthal at 7:19 PM