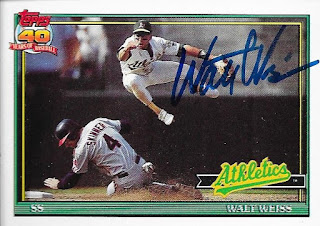 This 1991 Topps was a card that I really wanted to add to my autograph album, and I finally was able to when I saw that there was a private signing for Walt Weiss on SCN.

The 1991 Topps set has some of my favorite photography that Topps has ever offered.  The set is still very underrated, and can be had very cheaply, even with the Chipper Jones RC in there.