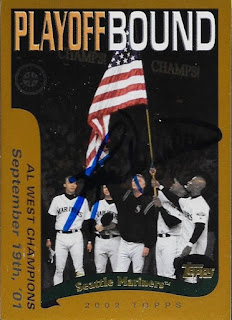 I don't normally like to send TTM to someone more than once, but I will do it if I find a cool card of someone I know who signs that I have gotten before.  I also have had to double up on a bunch of guys I sent to who I missed in my 1987 set.  I also like to wait a while before I DO double dip, but in the case of Lou Piniella, I mailed, then mailed again. 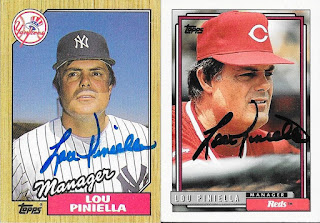 I saw that Piniella signed for $5/card, so the first time I sent, I sent these three cards with a check for $15.00.  I got all three back, but only the 1992 Topps was signed, and the check was ripped.  I believe it was Piniella who ripped the check, and obviously didn't cash it.

I figured that he preferred cash instead of having to deposit a check in the bank, so I decided to send the two cards he didn't sign back to him, this time with $15 in cash.  Yeah, I could have only sent $10, but I felt like it would be rude to say "Hey, you signed one for free, here are two more."  So, I felt like sending the whole $15 back was the right thing to do.

He is up for the "Today's Era" Committee Hall of Fame vote in December.  As a player, Piniella appeared on the 1990 Hall of Fame ballot, but received only 0.5% of the vote.