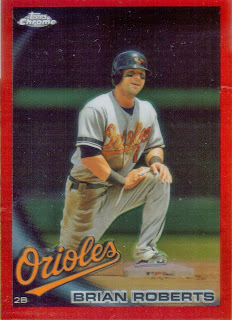 Since today is Brian Roberts' birthday, and since I got this awesome 2010 Topps Chrome red refractor in the mail today, I figured now would be a great time to post it.  It pushed back some of my other recent PC pickups, but that's ok.  More stuff to blog about.

So, I got this red refractor off of Ebay for $14.99, which is pretty steep, but since it is numbered 22/25, I guess that explains it.  The card looks awesome.  I, again, am lamenting the fact that it was almost impossible to pull colored refractors out of Chrome boxes that year, but maybe it was just my bad luck.

Roberts' contract with the Orioles is up once the World Series is completed, so he very well could be in another uniform next season.  I really hope not.  I know he was injured often over the last four years, but it would be fitting for him to end his career as an Oriole.  At this moment, he is the longest tenured Oriole and the only active player on the team who played alongside Cal Ripken.  Kinda strange to think about.  I think he will be re-signed to an incentive-laden deal that benefits both sides.  If he can stay healthy, he can definitely help the team, regardless of his age.
Posted by William Regenthal at 8:07 PM