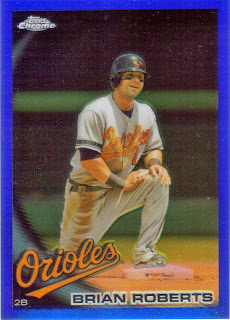 Recently, I bought a bunch of cards off of Ebay and COMC for my player collections.  Some of the cards, I couldn't believe I didn't have already, like the above 2010 Topps Chrome Blue Refractor of Brian Roberts.

I opened several boxes of 2010 Topps Chrome and I also put the set together.  What stands out the most to me about the Chrome offering of that year was the fact that the cards were all curved badly.  Something else that I remembered was that of all the boxes that I opened, I don't remember getting a single colored refractor parallel.  I think Topps really had some major issues with Chrome that year.  That being said, when one does happen upon one of the parallels, they really do look nice.  I really like the blue parallels.  The card is curved, but that is nothing that I good top loader can't fix.

My Roberts PC has slowed down over the last few years due to his injuries, but he is still one one of my favorite players.  I was able to add another 2010 Topps parallel of his that I will post later.  I got PC additions of Roberts, Chris Davis and Nolan Reimold, plus I have a few other things coming.  I spent a total of close to $20 on all of these PC additions, which is great, considering how many I was able to pick up.

Stay tuned and you'll see all of the cards that I got!
Posted by William Regenthal at 10:41 AM