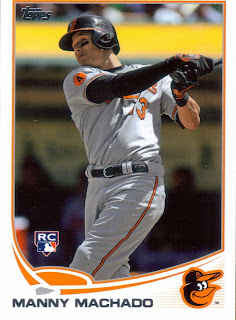 Last night, Manny Machado won his first (of hopefully many) Rawlings Gold Glove Award.  He was the first Orioles third baseman to take home the award since 1975, the last of Brooks Robinson's 16 awards.  That's some pretty good company.  Manny was one of three Orioles to win the award last night, along with J. J. Hardy and Adam Jones.  Chris Davis, Matt Wieters and Nick Markakis were denied.  The Orioles tied the Royals with the most Gold Gloves this year with 3.

I saw this Factory Set variation/SP on Ebay and decided to grab it.  I got it for less than $10 as an auction, so my timing was pretty good.  I figure it couldn't hurt to add another Manny RC to my PC, since his stuff is jumping in price right now.  It definitely is a cool card.
Posted by William Regenthal at 10:16 AM