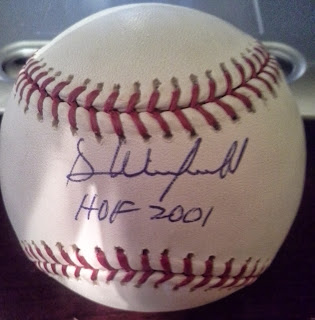 The other baseball in my package from Drew was of Dave Winfield.  Winfield (b. 1951) played in the majors from 1973 to 1988 and 1990 to 1995 for the Padres, Yankees, Angels, Blue Jays, Twins and Indians.  He had 3,110 hits, 465 home runs and a career average of .283.  He never won the MVP award (surprisingly) but finished 3rd in the voting in 1979 (behind tying winners, Keith Hernandez and Willie Stargell).  Winfield had to wait until 1992 to win the World Series, with the Blue Jays.  He had one other appearance in a World Series, 1981, when he batted .095 for the Yankees, gaining the nickname Mr. May from Yankee owner George Steinbrenner.

Looking at his stats, I would have thought Winfield had led the league in more of the traditional categories (you know, hits, runs, homers, RBI, avg, etc) but he only led the league in one of them, RBI, in 1979 with 118.  I guess the definition of him would be "solid".  He was a solid player his whole career and parlayed thar into the Hall of Fame.

So, thanks again, Drew, for the awesome birthday presents!
Posted by William Regenthal at 10:50 AM