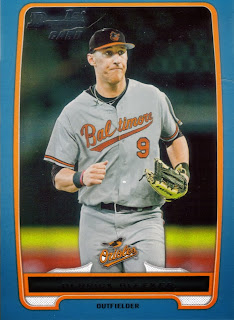 I am late in posting this, especially with all of the mail from recent purchases coming in.  I definitely wanted to get this one up before it was too far removed from arrival, so here we go.

I got a nice stack of Orioles cards from my buddy Weston from the blog Fantastic Catch.  One of the cards in the package was the above pictured Derrick Bleeker 2012 Bowman Blue parallel numbered 436/500.

I have to say, I know next to nothing about Bleeker, so I took a look at his baseball-reference page.  He was drafted by the Orioles in the 37th round of the 2012 draft and initially was an outfielder, but it appears he switched to pitching in 2013.  He appeared in 3 GCL games where he didn't allow a run.  He must be spending time in instructional league switching from fielding to pitching.  We'll have to see where the Orioles send him for the 2014 season.  I'm willing to bed he either starts at low-A Aberdeen or Delmarva.

Anyway, thanks for the package of cards, Weston!  Sorry it took me so long to get the package posted.
Posted by William Regenthal at 5:54 PM