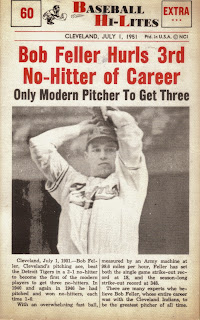 I picked up a few 1961 Nu Card Scoops cards last year from COMC (you can see the 1961 Feller I got here).  I knew there was a 1960 version as well, but hadn't been able to find too many of them online...  Until recently.  The above 1960 Nu Card Scoops Feller came in the mail yesterday after I picked it up off of Ebay for a few bucks.  This card, unlike the 1961 version, is an oversized card.

It has definite wear, as can be seen, but for a 50+ year old oversized card, I think it looks really cool.  I haven't added a whole lot to my Feller PC lately, so this was definitely a welcome addition.  I like how the last sentence in the text on the card states that Feller could be considered the greatest pitcher of all time.  53 years after this card was issued, that statement still can be considered accurate.
Posted by William Regenthal at 5:43 PM