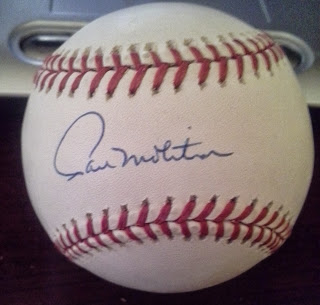 I got a package in the mail today from my very good friend, Drew, from Drew's Cards.  The package was a birthday present that I have been waiting for with great anticipation.  Drew already let it be known that there would be two Hall of Famers in the box that I needed and he definitely didn't disappoint.

Probably the oddest statistic, at least to me, is that Molitor never won a batting title.  I really would have thought he had at least one batting crown in his trophy case, but it appears he does not.  He did bat over .300 in 12 seasons where he played 100 or more games.  He hit .353 in 1987, only to lose to Wade Boggs, who batted .363 that year.  Not a bad guy to lose the batting crown to.

Thanks for the ball, Drew!  Stay tuned to see the other ball that he sent!
Posted by William Regenthal at 6:00 PM