A Gift From Nolan and Jenny 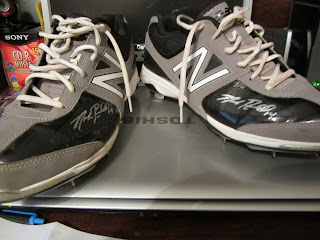 I got a package in the mail from Nolan and Jenny Reimold yesterday that I was expecting, but I wasn't quite sure what would be inside.  Jenny mentioned to me the Nolan had some extra equipment that he was going to get rid of and she asked me if there was anything I would be interested in.

Naturally, I said yes, since Nolan is one of my favorite players.  Inside the box was a pair of game used cleats, which Nolan had signed, and also a signed batting glove. 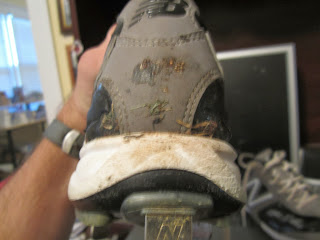 The cleats are really awesome.  I've actually never seen any with the metal spikes, since the two years I played in little league, I only had the plastic cleats.  These were really awesome and I would really feel bad if I stepped on someone's hand or slid into someone's leg wearing these.  Ouch! 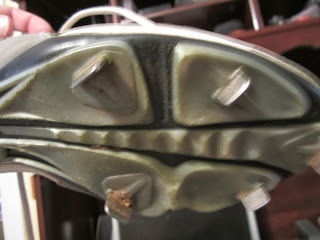 The cleats had a little bit of dirt and grass on them, so you can definitely tell that they have been used.  I took a look at Nolan's 2013 Topps card, since you can see his feet in the card, but these cleats did not match those in the photo.  That would have been cool, but since that picture was taken in 2012, I figure that was an old pair of cleats and I should be looking at his 2014 Topps card to see if I can see them there.  As you can see from the top photo, Nolan signed the cleats in silver sharpie. 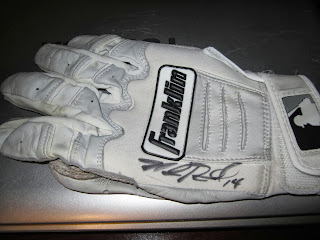 Also included in the box was this batting glove, which Nolan had also signed.  I love the glove, so it definitely will get displayed with the 2011 gloves that Jenny and Nolan sent me in exchange for the Bowie bobblehead that I 'traded' to them that Thanksgiving.

I talked to Nolan at Fan Fest this year and thanked him for the gloves and now I will have to meet him at this year's Fan Fest and thank him again.  I've already messaged Jenny thanking her for her generosity, but it can't be said enough.  Thanks Nolan and Jenny!  I know they read my blog, and so does Nolan's brother.  I've built a pretty respectable Nolan collection, if I do say so myself.  I'll have to put a page together on here next to my Virgil Trucks collection page so everything can be seen in one place.  That will definitely be a good rainy day project.

Anyway, thanks for the awesome stuff guys, thanks for reading and here's to a healthy and MVP-caliber 2014 season!
Posted by William Regenthal at 5:48 PM