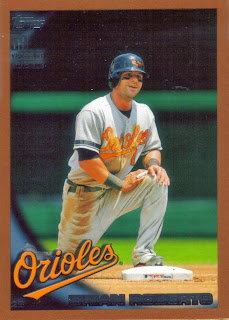 I know there isn't a copper parallel of Nolan Reimold's 2010 TOpps Update card.  I feel like this was a factory set exclusive, but I'm not too sure.  Regardless, it looks good and will be added to the multitude of 2010 Topps Roberts cards already in my possession.

Oh, before I go, Andrew is having a group break over at his blog, so you definitely should check it out.  For $10, you get a team of your choice and a random team from a jumbo box of 2013 Topps Update.  Teams will be going fast since there are a ton of rookie cards in there.  Head to his site and find the details!
Posted by William Regenthal at 2:42 PM