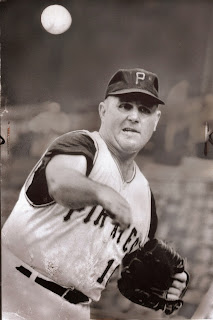 I had recently seen a photo of that 1960 Pirates team celebrating their World Series win and wondered to myself if I could see him in the photo.  I don't believe he is visible in the photo I was thinking of because he was a bullpen coach and apparently a that time didn't have a uniform number (according to Baseball Almanac).  In this photo, which was taken in 1963, it looks like his uniform number is 10.  A quick check to the Wikipedia page (and we know how accurate they are) confirms that he wore #10 that season.  A check to the 1960 team shows no uniform number for him.  Oh well.  I think I might look into figuring out some more information on the 1960 Pirates and see if I can find anything of Mr. Trucks with that team.  I know there is now a great film copy of Game 7 of that World Series that was discovered a few years ago in Bing Crosby's former wine cellar (really, where else would you look for that?).

This adds one more cool piece to my Virgil Trucks collection.  Just when I thought I had about tapped out my options with that collection, I was able to find something else to add.  This is something that always makes me happy.
Posted by William Regenthal at 6:16 PM