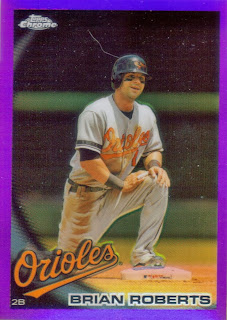 I added yet another Brian Roberts card to my 2010 Topps rainbow project.  This time, it was a purple refractor numbered 306/599.  I know I have said it numerous times, but I really like the colored parallels out of Topps Chrome.  I used to not be really into Topps Chrome, but 2010 really sold me on it.  That is kind of funny since 2010 might have been the worst year of Topps Chrome.  You know, with all the curving problems and near impossibility of pulling colored parallels.  Maybe its just me.

I have so many of Roberts' 2010 Topps parallels, but I saw one on Ebay yesterday that I really need to jump on, the 2010 Topps printing plate...  Uggh, I'm gonna go broke.
Posted by William Regenthal at 5:34 PM