A Kind of Trade With Scott 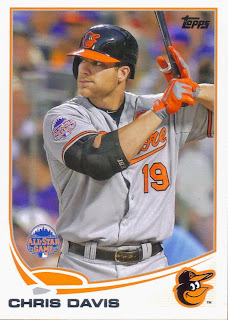 I just got back into town from the Charlotte, NC Pearl Jam show that occurred last night.  It was freaking amazing.  Just saying.  We did have a blast.  I wanted to get a post done today since I'm pretty wore out and I still have to carve up two pumpkins.

I got a nice trade package from my good friend, Scott, the other day.  He sent me some Orioles, mostly 2013 Update stuff, in exchange for me picking up a Mike Napoli auto off of Ebay that he had been watching.

Scott's a great guy, so anytime I can help him out, I usually try to do my best.  I'm sure he is recovering from last night's Red Sox victory.  That was the first World Series in forever that I haven't watched the last out on TV.  Eddie Vedder gave an update during the concert, and I checked my MLB At Bat app on the way to my wife's parents' house to get the final score.  She and I have been together for the final out of the World Series since Luis Gonzalez got the winning hit in the 2001 series.  It's all good, though.  I missed it for a worthy reason, the Pearl Jam show was AWESOME.
Posted by William Regenthal at 3:06 PM