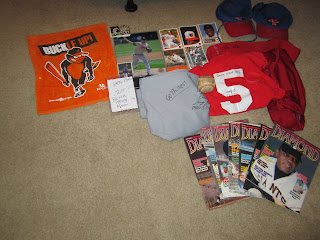 I've been really slow in getting mail posted on this blog, you know, with all of my Ebay pickups and all.  However, I really wanted to show the interesting stuff I got in two different shipments from my good buddy, Michael.

Michael and I met at Fan Fest this past year, and again at the Orioles game that I took my son, Chris, and my nephew, Jacob.  Michael is a really great guy, and since he has a younger brother who is about Chris's age, he is really awesome with kids.  He and Chris have hit it off and have even skyped together a few times.

Michael also is a baseball player.  We have talked at length about his playing for his school and town team(s) and he is very proud of his playing ability.  He included in the two boxes several game used articles from his 2012 season of school ball.  As you can see in the picture that he is either really generous, or he really wanted to clean out his closet.

In the boxes, he included: 2 signed hats, a signed uniform shirt, a signed under armor shirt, a signed belt, signed pants, a signed bracelet, a signed game used baseball, signed game used (and hopefully washed) socks and a necklace (that he was unable to squeeze a signature on).  We joked that all I need now is a mannequin and I will have a fully dressed baseball player in my man cave.  We joke about all the stuff he sent, but in reality, it is the mere thought that counts.  He's a great guy and I appreciate him thinking of me.  Who knows, maybe he will become a major leaguer and I will have all of this stuff.

He also included a bunch of Orioles stuff.  Some of which I bought off of him, and some of which was part of my birthday present.  Coincidentally, Michael's birthday is 10 days after mine, so with what I sent him for his birthday, it ended up being a trade of sorts.

Anyway, he sent me a stack of mid-90s Hall of Fame magazines.  Those are really cool.  I plan on letting Chris read them to practice his reading.  He sent me the Buckle Up Birds rally towel that was given out during the 2012 stretch run.  Signed Orioles post cards of: Wei-Yin Chen, Joe Durham, Ronny Paulino, Dick Hall, and Cla Meredith.  I got a signed Jason Hammel 8 x 10.  Finally, he included some baseball cards of Orioles, two of which were autographed (TJ McFarland and Jeff Fiorentino).

Michael has quite the memorabilia collection.  Especially his Orioles stuff.  He is always at games and always knows how to find good stuff.  He constantly adds stuff to his Ebay profile, which you can check out here.  He's a really great guy who I enjoy talking Orioles baseball with.  Thanks again for all the stuff, Michael!  It definitely is appreciated.
Posted by William Regenthal at 11:24 AM