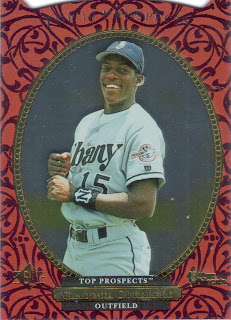 I took a trip to the Greenville card shop on Saturday because I was bored.  I picked up a few packs of cards and also hit up the bargain bin.  In it, I found a couple Bowman Platinum cards from this year of Kevin Gausman and also some cards for a few fellow bloggers.  I also found the above 1995 Upper Deck SP Vladimir Guerrero prospect card.  It was only a dollar, so I figured it wouldn't be a bad pickup.  It looks really cool and I can't recall that I have seen it before. 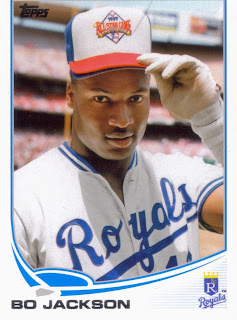 The coolest part of the story, however, comes out of the $12 pack of 2013 Topps Update that I got for Chris.  He got the SP of Bo Jackson.  Since I am a fan of Jackson, I thought it might be a good idea for me to take it off of his hands.  I traded him some Tim Lincecum cards for it and have now added it to my collection.  I made sure to make a fair trade with him so he knows how to do it in the future.  He had begun to have more and more trade requests and I want to make sure he knows how to deal fairly.  I didn't take into account with him that I had purchased the pack with my money; That might have just confused him.  I hooked him up, trust me.
Posted by William Regenthal at 5:48 PM