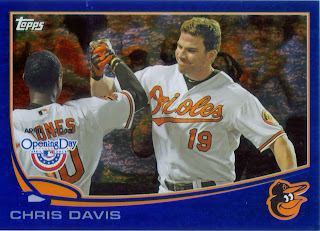 I got so close on this one.  Really.  The serial number on the back is 0018 of 2013.  One more and it would have been Davis's jersey number.  Does it really matter to me?  No, not really.  I do have a few cards that are numbered to a player's jersey number.  One of my greatest pack pulls was a quad jersey of Cal Ripken numbered 8.25.  Not bad.  Any 1/1 I get of Brian Roberts is numbered to his jersey number.  Also one of my Brooks Robinson patches is numbered 5/50.  So, maybe it is a little bit of a deal, but not too big of one.

Anyway, here is a really nice Chris Davis blue parallel out of 2013 Opening Day.  Yet another card to check off of my extensive rainbow list.  Too many to count, but I do have quite a few.

Tomorrow is the big day when I find out if Davis came in second or third in the MVP voting.  Some all-time greats never were voted MVP, so I have to keep things in perspective.  I am rooting for him, of course.  We'll see tomorrow after 6.  I'll likely be listening on the radio on my way home from a site.  Would be nice to see it on TV, but work comes first.
Posted by William Regenthal at 10:01 PM