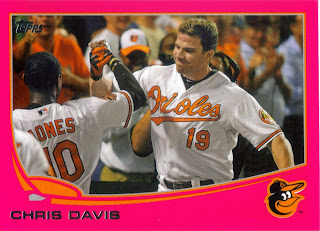 Here is another card that I was able to pick up off of Ebay with the help of my good buddy, Andrew.  He must have been bored, but he was searching Chris Davis cards for me and came upon this Pink Mini parallel.  I got it for less than $10, actually, which is amazing since the card is numbered to 25.  The normal size Davis Pink is going for $19.99, buy it now.  I still need that one as well.

The AL MVP award will be announced soon and everyone is saying that Miguel Cabrera is going to win it.  I would like to think that Davis will give him a run for his money, even though the Orioles didn't make the playoffs.  Davis won 2/3 of the Triple Crown, which Cabrera won last year.  Most writers used the Triple Crown argument (which I agreed with) to trump the new-fangled sabermetric approach that had some folks drooling over Mike Trout last year.  Folks are still drooling over Trout.  He's a good ballplayer and all, but the Angels were not a really good team with him or without him this year.  I think Davis was a key component in the Orioles' season this year and stayed healthy (while Cabrera didn't, and tailed off in late August through September).  Anyway, this is really grasping at straws.  Cabrera is a hell of a player and if Davis finished second to him, then I'm ok with that.
Posted by William Regenthal at 5:31 PM