My Second Trade With Matthew 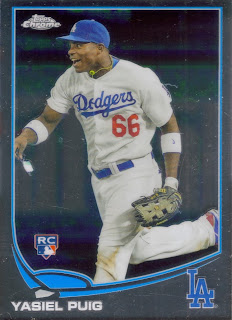 I have no idea what I sent him in return, but I made a second trade with Matthew recently which landed me this 2013 Topps Chrome Yasiel Puig RC, which I will be needing to complete the Chrome set.  Yeah, I said it.  I'm going to try to put the set together.  It shouldn't be too hard, seeing as I have opened 3 boxes.  I bet I'm relatively close, but we'll see when I sit down and sort everything.  I haven't had much time for that recently.

I got a bunch of other cards in my package that Matthew was nice enough to throw in.  My package wasn't the best of the bunch, though.  Matthew included a bunch of cards for Christopher, and, well, he really blew him away with his generosity.  I was very impressed.  I will have to let Chris tell the story of what he got, though.

So, that's 2 trades I have done with Matthew.  He seems to be learning the ropes pretty well.  Head over to his blog and check it out.
Posted by William Regenthal at 7:22 PM