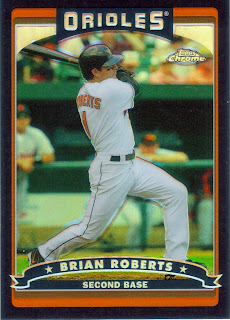 I need to go back and take a look through my 2006 set and see the names that showed up in there.  I can't even begin to name off any of the good rookies in there, with the exception of the oddball Alex Gordon card/non card that popped up.

Now, this card itself, looks really cool with the black and orange and matching up with Roberts's uniform.  I'm enjoying this card quite a bit for sure.  Especially for 55 cents!
Posted by William Regenthal at 9:38 PM