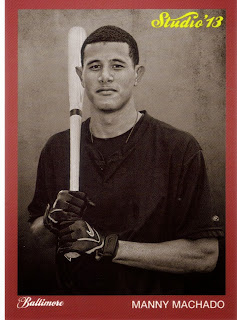 I'm a little bitter about Chris Davis getting 2/3 of the Triple Crown and finishing in 3rd for the AL MVP award.  I get it that Mike Trout is a hell of a player, but come on.  Really?

Anyway, let's put my bitterness aside and talk about the guy who finished 9th in the voting, Manny Machado.  Manny had a great year.  He really emerged as a future star of the game and was amazing defensively.  It really would have been nice if his knee would have held up, because it looks like he will not be ready for opening day.

I'm also happy with this card.  I saw it on COMC, and had no idea that Panini resurrected the classic Studio design.  Apparently, this was a Father's Day thing, and the cards look as amazing as they did back in 1991 when they first came out.  I got it off of COMC for $3.24 and I feel like it should be worth more than that.  It definitely is finding a place in my Manny PC.
Posted by William Regenthal at 7:41 PM