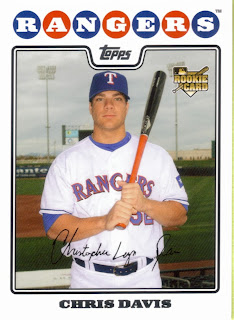 I know I owned this card at some point.  I know I did.  I bet I sent it on to some fellow blogger who is a Rangers fan.  Luckily, this card is still pretty affordable, seeing as I only had to spend $2.50 of my COMC store credit to get it.

I remember busting several boxes of 2008 Topps.  I know I had a ton of them, but I sold what I had leftover from my set building at a show a couple years ago.  That's one of the drawbacks of selling stuff constantly, especially when you move things to make room for others, there are casualties.  Of course, I had no idea back then that Chris Davis would become an Oriole and I also had no clue that he would become one of my favorite players.  So, that's the risk I take in having to part with some cards.  Thankfully, though, my COMC page has been successful enough in that I have been able to flip some other cards for store credit and use that to buy PC and set needs.

So, here is the Chris Davis RC that I got.  I need the gold parallel now, so if anyone has it, let me know!
Posted by William Regenthal at 12:52 PM