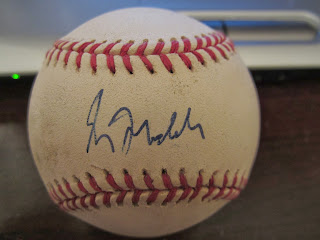 It's just a matter of waiting patiently until the announcement is made on January 8, 2014 at 2:00PM, but as of right now, this ball will have to wait to be placed among my Hall of Fame signed baseballs.  This one and possibly a couple more that I have, really.  We'll have to see.

That being said, for the low price of $52.00, I was able to pick up this Greg Maddux signed baseball from Conrad at the Columbia Antique Mall.  Conrad had gotten several cases of the Maddux balls from a private signing (he also had some Glavines, one of which I should have grabbed.  I was really happy with this Maddux, though.

Maddux (b. 1966) played in the majors from 1986 to 2008 for the Cubs, Braves, Dodgers and Padres.  He:
So, based on all of this, I am REALLY happy to have added this ball to my collection.  My only question is, with the voting being announced on January 8th for the 2014 Hall of Fame election, what idiot(s) will leave Maddux off of their ballots?  You and I know that someone will and they will try to make an argument for their decision.  Kind of like the woman last year who tried to say that Shawn Green was a deserving candidate but then said that she didn't vote for Jeff Bagwell because he did steroids.  That is another story all in itself, but you get my point.

Anyway, regardless of the few stupid voters out there, Maddux will be getting a call on January 8 saying that he is a member of the 2014 Hall of Fame class (one that has the potential to be one of the largest in history).  It will be then that this ball will be placed among my collection of Hall of Fame signed baseballs.
Posted by William Regenthal at 8:18 PM