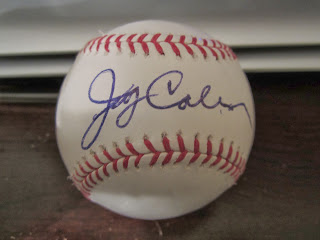 My last TTM success was June 1, 2013 and there has been quite a gap in between my sending off anything to get signed.  Mainly because I just haven't had time to get anything together to send.  Or, my own laziness.  Take your pick.  Nevetheless, I did, in fact, get a TTM success today.  This is my 75th TTM success and just so happens to be my 95th Hall of Famer.  The ball is signed by 2005 Ford Frick Award winner Jerry Coleman.

After his playing days were over, Coleman switched to broadcasting.  Coleman became the voice of the San Diego Padres and 1972, a position he held every year since, except for the 1980 season (He managed the Padres that season).

I mailed to Coleman on November 12 and got him back today, making him a 10-day TAT.  He signed my ball with no fee.
Posted by William Regenthal at 9:49 PM