1969 Topps Pickups From The Antique Shop 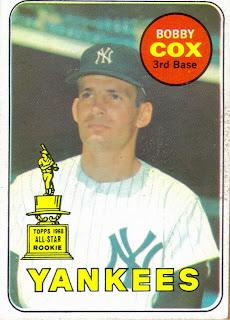 I finally was able to sit down and scan some 1969 Topps cards I got from the antique shop in Columbia last weekend.  I picked up 29 cards total and several of them were higher end cards.  I picked up this really cool Bobby Cox rookie.  Someone at the card shop in Winston-Salem had asked me to look for one for them, but they never were willing to pay to get it.  So, I never picked one up for them and completely forgot it was in this set.  Anyway, I'm happy to have it and it is in really good condition. 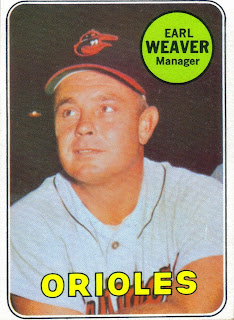 I saw this Earl Weaver (look how young he is!) and had to add it, too.  He began managing the Orioles halfway through the 1968 season, so this is also his rookie card.  Not bad! 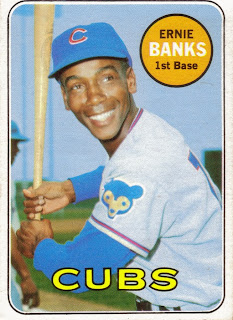 I was especially happy about this card.  Ernie was on the tail end of his career here, but he still looks like he is happy to be playing ball.  I seriously would consider starting an Ernie Banks PC.  Off of the top of my head, I can think of some awesome cards that he has.  The fact that I was also able to get him to sign for free TTM is just a bonus.  Quick trivia question: What do Ernie Banks and I have in common?  Answer: We both attended a Pearl Jam concert in 2013. 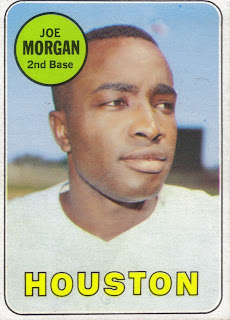 Rounding out the Hall of Famers I picked up, I got this nice Joe Morgan.  The card is really sharp.  Morgan is a super nice guy and was amazing to Chris the few times he has met him.  I'll never forget that and I'm sure Chris never will either.

Some other notable cards I got were Orioles: Boog Powell and Elrod Hendricks; rookie cards: Graig Nettles and Amos Otis; and other notable names such as Tommie Aaron, Mayo Smith, Roy White (whom my buddy Drew has met) and Ken 'Hawk' Harrelson.

I think I did really well with these 1969s.  I definitely enjoy this set and can't wait to add more to my collection.
Posted by William Regenthal at 10:26 PM