My Thoughts on 2012 Topps Update

To get my mind off of last night's meltdown, I figured I would post about the jumbo box of Topps Update that I picked up from the card shop yesterday. 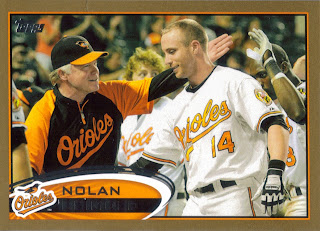 When one of the gold cards you get is one of the players who you are trying to get every single parallel of, that definitely makes getting the box worthwhile.  I was super excited to pull this Topps Gold Nolan Reimold from one of the first packs I opened (I think it was the second or third pack I opened.  I think all I need of him from 2012 now is a printing plate, any 1/1 they issued (platinum or whatever) and the orange factory set exclusive (I should have bought one when I saw it.  Oh yeah, I still need his mini black parallel. 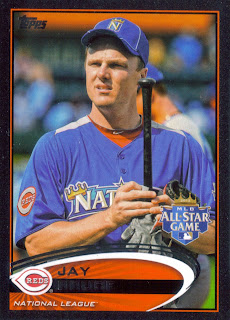 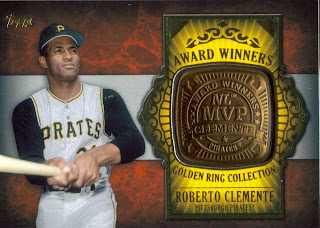 Speaking of black parallels, I pulled the above Jay Bruce from my box.  Cool.  I also got the above Roberto Clemente award winner golden ring.  Pretty cool card.  I'm probably one of the few who likes the manufactured rings.  But hey, I also enjoyed the manufactured patches also. 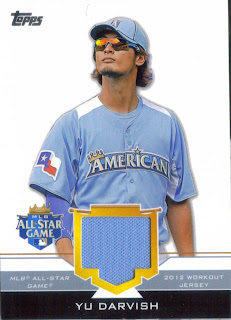 I think my biggest hit was the above Yu Darvish relic.  Usually, pulling Darvish stuff is up to my buddy Scott, since it seems Darvish is in every pack he opens.  I bet Scott could buy a crappy wax pack of 1987 Topps and pull a Darvish... 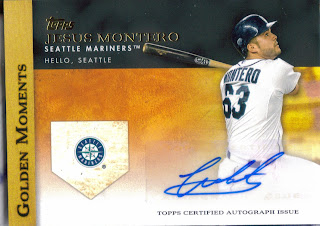 Hey look!  My wife can finally have that Jesus Montero autograph that he denied her a few months ago.  If you don't remember the story, my wife asked him to sign her notepad at a game in August and he told her he doesn't sign pieces of paper.  He does, however, sign stickers.  Yeah, this is trade bait. 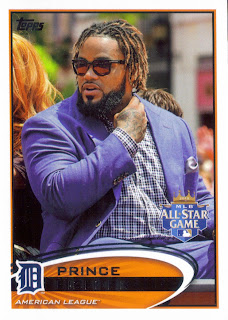 Finally, after doing a google search this evening for Topps Update Short Prints, I discovered that I owned a short print of Prince Fielder.  The all star cards featuring players in suits is one of the variations that permeate this year's set.  There are also some All Star parade SPs as well as horizontal SPs.

I had two minor disappointments with this set/box.  One i that Miguel Gonzalez didn't make it into the checklist, so I'll have to wait until sometime in 2013 to get his RC.  My other gripe is that the Jim Thome in an O's uniform is a SP and it is going at a ridiculous price on Ebay.  I figure I'll wait for them to flood the market and snatch one up for cheap.
Posted by William Regenthal at 7:04 PM

I would like to put dibs on that Jesus Montero au, I'll email you what I have to trade