Before Saturday's game, we all (me, Ryan, his wife, my wife and my son) went to the Baltimore Animal Shelter and attended one of the Buckle Up rallies that had been held to pump fans up about the team.  At the event were Orioles players such as Brian Matusz, Jake Arrieta, Chris Tillman, Nate McLouth and Wei-Yin Chen.  You were supposed to buy the $15 BARCS Pet Calendar in order to get an autograph, but the players were signing anything put in front of them.  I did get the calendar, in case you were wondering. 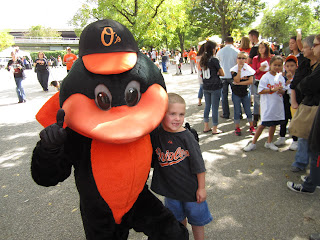 They were also giving away T-Shirts, so I got a free Buckle Up shirt and Chris got two free shirts, Arrieta and Matusz.  I was hoping he could get a Chen shirt, but they were all gone by the time we got there. 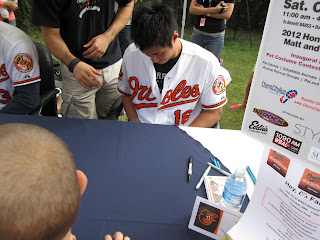 Here is a photo of Wei-Yin Chen signing Chris' baseball.  We were at the tail end of the line and were being rushed through.  The event was supposed to end at 2PM, but we got to the front around 2:10.  They still signed for the remaining folks in line, which I thought was nice.  The handlers wouldn't have had this problem, however, had they moved the line along quickly to begin with. 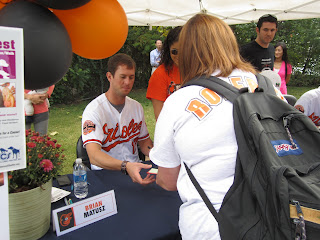 Here is a rare shot of my wife making it onto my blog.  She was flirting with Brian Matusz, I think.  Trying to bribe him with her endless pad of signatures.  Actually, he flipped through her pad and wanted to look through it, but he didn't have enough time.  He even told my wife that he was dying to know who all she had in there. 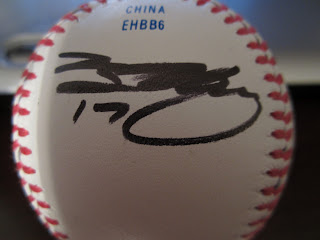 Here is my Matusz ball.  I now have 3 signed baseballs from Matusz.  I might be willing to trade one if someone has anything to offer.  Just saying. 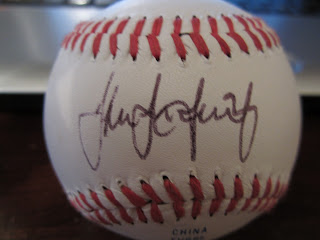 Here is my Jake Arrieta ball.  This one, along with the one below were a little tough to distinguish 'which way is up.'  I had to go on Ebay and look at some other Arrieta autos in order to tell which was the proper orientation for his auto.  The photo above is the correct oriantation. 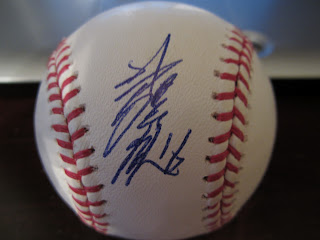 So, now, this one is really cool.  Wei-Yin Chen came from the Japanese league, but is actually from Taiwan.  He signs his name in Mandarin Chinese and it is read from top to bottom (I think).  At least, he put his number at the bottom, so I assume that is how it is to be read.  If any Chinese scholars would like to correct me on this, please feel free to do so.  I know English and German, so Chinese is definitely not a strength of mine.  I was excited to get this ball, however.  I got the Matusz and Arrieta autos on Rawlings OLB balls, and the Chen on a Selig OMLB ball.

We had a blast at the Buckle Up rally and got 3 good signatures for only 15 bucks, so I feel like we made out pretty well.
Posted by William Regenthal at 6:34 PM